What’s the most common fear in surgery? 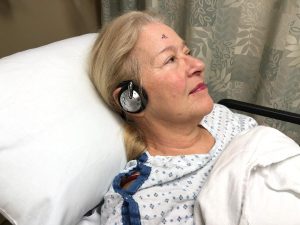 Since I originally wrote this post in 2007, we have really come a long way!  In 2007 we had not yet received our U.S, Patent or actually started our first ever model of the Surgical Serenity Solutions headphones!

Now, not only are we on model 3.0, we also have 4 additional playlists as well as a Mobile App in the Apple App Store and the Google Play Store

You can listen to samples of all 5 playlists and then choose the one you want!

The clinical research study printed below has been a key for many people to understanding how calming music works to decrease fear and anxiety, as well as to decrease pain perception.  After almost 25 years of working with patients both pre and post surgery, I can emphatically state that using music as a way to prepare for your surgical experience, as well as to calm your pain and fears after the procedure is over is both effective and absolutely without side-effects.

Hundreds of patients have used the Surgical Serenity Solutions pre-loaded headphones for procedures such as:

This study was conducted in the University Hospital Anaesthesiology Department in a city with a population of 2 200 000.
During routine preoperative screening, 536 adults (>19 years) were questioned one day before surgery, about their anxiety or fears or worries and information requirements by using a questionnaire consisting of open and closed ended questions. Interviews were performed face to face by the same anaesthesiologists.
In addition, visual analog scale (VAS:0-100) was used to measure the level of anxiety of the patients by asking them to express the amount of their fears, anxiety and stress in number and mark it on the VAS scale (Kindler et al, 2000).

The answers were categorised and then analysed using the Chi-square test. The relationship between the patients gender, education, income and previous anaesthetic experience were assessed with the answers given to questions 1-9 in the questionnaire with using regression corelation analysis. p<0.05 was considered as significant.

Illiterate or primary school graduates had more fears or worries about surgery when compared with the higher educated patients (p<0.05).

There was no significant correlation between the educational status of the patients and fear from anaesthesia.

The most feared aspect was “not waking up” after anaesthesia and surgery which was similar between the sexes.

The percent of patients who expressed fear were 17%, 29.7% and 40.7% in the low, average and high income groups respectively (p=0.00165). The increase in fear from surgery was not significant between the income categories (p>0.05).

There was no correlation between the increase or decrease of income and demand for information and VAS scores (p<0.05).

VAS scores were lower in subjects with a history of surgery and anesthesia(p<0.05).

Fear is considered as a normal feeling that always accompanies people throughout life. It is a compound phenomenon that has psychological, motor, somatic-vegetative and metabolic components.

Even the thought of operation and anaesthesia increase the feeling of anxiety.

The dimension of fear has inconvenient influence on the time of recovery, quantity of complications and the discomfort felt by patients.

The incidence of preoperative anxiety was reported as high as 60% of surgical patients (Hashimato et al 1993).

The dimension of the fear can be measured in many ways.

The questionnaires are one of the methods of taking an objective measurement.

“Hospital Anxiety and Depression Scale (HAD)” and

In fact, many studies indicate that monitoring of anxiety can be very useful in decreasing fear.

Determining the factors affecting anxiety and fear can be useful to correctly define and decrease them.

We aimed both to measure anxiety or fear of patients and also to evaluate the factors effecting anxiety and fear. We used a simple questionnaire and VAS .

In our study most of the patients stated that they had no anxiety or worry about anaesthesia (71.3%) or surgery (64.4%).

This may partially be a reflection of the belief in faith.

We considered that the religious culture influences people more in stress-full conditions. Religious belief requires belief in faith and destiny. This belief may have had an increasing influence on the high rate of patients without fear.

Our questionnaire did not include type of the operation but we found no relationship between malignancies and fear or anxiety.

Young patients were found to be more anxious in previous studies (Kindler et al 2000, Mc Gaw et al , 1998). In our study there was no difference in the reasons of anxiety and fear between the age groups.

According to a study conducted in Spain (Sanjuan et al, 1999), the most common fear is “not waking up”.

In a study from Switzerland (Badner et al, 1990), three kinds of fear were noted among surgical patients; 1- the fear of the unknown, 2- the fear of feeling ill, 3- the fear for one’s life.

In a study from Jamaica, the most common fear was death on the operating table. In our population, most of patients had no worries about anaesthesia or surgery. If he/she worried about anaesthesia, most feared was not waking up. When asked about surgery, our patients worried from ” failed surgery”. The type and reason of fear may vary with nationality.
Income was not investigated as a factor in previous studies. More patients in the high income group have fears on anaesthesia when compared with the lower income group.
Determining the reasons and factors influencing preoperative fear and anxiety in our population may help us in the management of our patients. Proper management of fear and anxiety by the anaesthesiologist may provide better preoperative assessment, less pharmacological premedication, smoother induction and maybe even better outcome. Further studies on preoperative anxiety are needed to evaluate the impact of anxiety and fear management on surgery and outcome.
In summary, most of the patients did not have fear or felt anxious about both the anesthetic and the surgical procedures, preoperatively. This was found to result from religious believes. Women and patients from a lower education level were the most to feel anxious and fearful, preoperatively. Anesthesia was defined properly by 66% of the patients, but they were not aware of both the anesthetic procedure and the role and identity of the anesthetist. Although, the feeling of trust for the surgical team was one of the factors that prevented fear and anxiety, we observed that most of the patients did not have enough information about their illnesses (especially malignancies) and the surgical procedures they would run through. Informing the patients on the anesthetic and the surgical consequences of their planned operation, preoperatively, can play an important role in preventing anxiety and fear. Especially the women and patients from lower educational level must be informed in more detail. We think VAS could be used to measure preoperative anxiety, as there was a positive correlation between VAS scores and the results obtained with the anquette method.
We concluded that visuel analog scale may be useful for assesing the preoperative anxiety and fear. Nationality and religious belief can effect the behaviour related with preoperative anxiety and fear. Further studies are needed.