An abdominal aeortic aneurysm is a very dangerous condition.  According to the Mayo Clinic website, “Tears in the wall of the aorta (dissection) are the main complications of abdominal aortic aneurysm. A ruptured aortic aneurysm can lead to life-threatening internal bleeding. In general, the larger the aneurysm, the greater the risk of rupture.”

Walking around with any kind of aneurysm is frightening and stress and anxiety is inevitable.  This 70-year old gentleman had read about the Surgical Serenity Solution online and was very eager to give them a try for his upcoming surgery.

Like the vast majority of our customers, he had a very positive experience and was eager to return to my office and tell me about it!  Listen as he relates what happened to him!

I understand.  If you’re going to spend almost $200 on something to help you have a more successful surgery, you really want to know that it works!  Do we have proof?  Yes!  We have proof that our Surgical Serenity Solution has help hundreds of people to get through difficult surgeries with less anxiety and less pain.  You can hear some of the patients talking about their experiences here:

Not only have our patients raved about the headphones, but we have surgeons and anesthesiologists who are pleasantly surprised at the benefit the patients are reporting after a variety of procedures ranging from a C-section to major heart surgery and joint replacement surgeries.  Listen to the actual patients describing what the experience was like for then!

What are some of the surgeries that our headphones have been used with successfully? 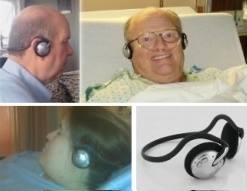 This is a questions that I’m frequently asked when people are planning to use music with their surgery.  The concept of using music during surgery is still a very new concept and many patients are confused about whether it is primarily for them or for the doctor.

Of course, one of the BIG benefits of the Surgical Serenity Solution is that both patient and doctor can each have their ideal, preferred type of music!  Usually the surgeon wants music that is

The patient needs music that is

So why does the patient need unfamiliar music and the surgeon gets to use familiar favorites?  Primarily because the surgeon is wide-awake, needing to focus and aware of what music does that for him.  The patient, on the other hand, needs to brought down in energy level, consciousness, and awareness of surroundings.  Something slow, steady and soothing will best do that; and because music is so often associated with specific events and people, we need to choose music that is not widely known and associated with pop culture or well-known events.

The music that we use on our pre-programmed, cordless headphones is classical music that the average person will not know.  In all the hundreds of people that have used the headphones, only one person at the last minute had a negative association and asked that headphones be removed.

We do have samples on our sales pages that give you a representative sample of what our music sounds like.  See  http://www.surgicalserenity.com/purchase.htm

So, back to the question “what surgeries have successfully incorporated the use of music through Surgical Serenity Headphones?”  So far we’ve been present for:

and many, many more!

If YOU are having surgery and want to ask questions before buying, please contact me through my website or this blog.  Thank you!!

This 70-year-old gentleman had undergone surgery many times and, although he wasn’t excessively anxious about his procedure, he was quite intrigued by the idea of using music with his surgery, especially since he is a huge fan of classical music.  Here is his story:

Jim came to my office for about 30 minutes, a week before his surgery.  We talked about his procedure and how music might positively affect the total experience.  Jim is huge classical music afficianado, so when he found out that our proprietary music is classical, he was thrilled.  When he was told that after his surgery, he could put any music he wanted on the headphones and continue to use them for probably another 5-10 years, he was excited!

After his serious surgery, Jim wanted to come back to my office to tell me his story.  You’ll hear his story in the video above, but just let me encapsulate by saying that he was told before the surgery that it would probably take 4-5 hours.  It took slightly less than 2!  He was told that he would be in ICU for probably 3-4 days.  After one night in ICU and continuing to wear his headphones, he was discharged from the hospital to his home in exactly 24 hours!

Of course Jim attributes all of this to his headphones and we are agreeing with him!  Don’t you want to try them too?

To purchase your own:  www.SurgicalHeadphones.com