Live piano music in surgery? Why not?? 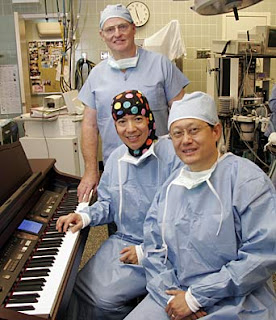 By Helen Altonnmailto:haltonn@starbulletin.com?subject=http://starbulletin.com/2008/06/25/Classical music played on a piano in the operating room for 115 patients having eye surgery at the former St. Francis Medical Center-Liliha had “profound” physical benefits, it was reported today.
The music lowered the patients’ blood pressure and heart and respiratory rates before any sedation or pain medication, according to a paper in the Medscape Journal of Medicine, a Web resource for physicians of peer-reviewed medical journal articles.
Dr. Jorge Camara, a classically trained pianist and ophthalmologist, played music for patients before surgery as part of a study from May to August 2005 to demonstrate the medical benefits of music.
The classical and semi-classical pieces ranged from Debussy’s “Arabesque No. 1 in E Major” and Chopin’s “Etude in E Major, Op. 10 No. 3,” to “The More I See You,” by Harry Warren and Mack Gordon.
The patients, 49 to 79 years old, were having surgery for the first time. The study reports average decreases of 21 percent in their blood pressure, 8 percent in heart rate and 21 percent in breathing rate.
“This sentinel paper validates the growing evidence that listening to relaxing music has profound beneficial effects on the physiologic functions of the human body,” said Camara, director of ophthalmology in the Department of Surgery, University of Hawaii John A. Burns School of Medicine.
He believes it’s the first study in which a surgeon performed on a piano in an operating room for patients before surgery.
When Camara began the project, Samuel Wong, former Honolulu Symphony music director, and Arthur Harvey, former University of Hawaii music professor and researcher, joined him in playing the piano for patients.
A total of 203 patients underwent ophthalmologic procedures when the piano was in the operating room, but 88 had no music played. The result was “a statistically significant increase of their mean arterial blood pressure, heart rate and respiratory rate,” the study found.
Co-authors of the paper, “The Effects of Live Classical Piano Music on the Vital Signs of Patients Undergoing Ophthalmic Surgery,” are Joseph Ruszkowski, Kamehameha Schools music teacher, and Dr. Sandra R. Worak, a research fellow trained by Camara now working in the Philippines.
No complications were associated with the music, and patients “were very happy their doctor was playing the piano for them,” Camara said in an interview.
He said Kahala painter Laurie McKeon, 57, one of the patients who heard live music, wrote about the experience, explaining how scared she was to have surgery and how the piano music made a huge difference.
She wrote: “The music soared above me, swirled around me. It penetrated through my pores, beyond my ears, past my mind and somehow, into my heart. I felt at peace. I felt safe. I felt like everything was going to be just fine. And it was.”
Camara no longer has live piano music in his operating room but patients hear a recording of him playing the piano. He is past president of the Aloha Medical Mission and has given three piano concerts to benefit the organization at the Neil Blaisdell Concert Hall.
Citing growing interest in the medical benefits of music, he said, “So much more has to be studied,” such as the effect on male versus female patients and rap music versus relaxing classical music. “This is only the beginning of a journey that will open our eyes to the wonderful potential of music for healing,” he said.
The paper can be seen on http://www.medscape.com/.
For more information, please go to http://www.HealingMusicEnterprises.com. Dr. Cash has conducted research on the healing properties of music at the University of Louisville School of Medicine. She has been on staff at several hospitals including Baptist Hospital East and Norton Hospital, both in Louisville, KY.

Music and Surgery coming to Lexington! 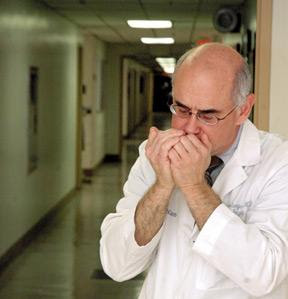 Dr. Jay Zwischenberger, UK chief of surgery, plays his harmonica. Staff and patients are said to find “Dr. Z’s” music a source of reassurance and comfort. June 13, 2008 Musicians have long known intuitively that experiencing the rhythms, harmonies and melodies of music —as listener or performer— can help mend the troubled mind, body and soul. And health professionals have long shared an intuitive understanding that this healing quality of music has a lot to offer medical science; witness the calming heart-rate monitors in a Savannah neo-natal ward as the regular visits of a harpist get underway. Now these enduring intuitions are converging to form the basis of an innovative program integrating the arts in health care at the new Chandler Medical Center at the University of Kentucky.