Total knee replacements are being done around the world all day every day.  With the Baby Boomer population finally entering their retirement years, the surgeries to repair aging bodies are happening in every country on the planet.  Of course, no one really WANTS to have surgery, but joints that are worn out cause a lot of pain and create a major impairment to a happy and comfortable retirement.  Just as we finally have the time to start enjoying every single day, travel, vacation, and play with the grandchildren, our bodies start falling apart!  It’s not fair, is it?

But there are lots of ways to make this procedure more tolerable, safer, and improve surgical outcomes, all in a perfectly natural way!  The method that you can now utilize and benefit from now is the use of scientifically chosen and sequenced classical piano music that calms, soothes, and stabilizes vital signs through a process called rhythmic entrainment.  This process was discovered hundreds of years ago, but thanks to modern technology, this music has been pre-loaded into lightweight, cordless headphones and they are being used in hospitals and dental clinics around the world!

What do the patients say, you ask?  Well, the reviews are glowing!  “It made all the difference in the world”  is one that I hear over and over.  “I will never have surgery again without this marvelous headphones!” is another that I’ve heard numerous times!  Another patient said “I drifted off to sleep this time, not frightened and worried that I might not wake up, but listening to this beautiful music.  Then there was a period where I heard nothing, then suddenly I was waking up again and listening to that beautiful music and I knew the surgery was over!”

Are YOU having knee replacement or hip replacement surgery?  Or any painful or anxiety-producing surgery at all?  If so, you might consider getting the Surgical Serenity Headphones, already loaded with our beautiful, chosen for surgery music!!  Just go to www.SurgicalSerenitySolutions.com.

Putting Your Music on Our Headphones

Are you think of putting your music on our headphones?  This afternoon I received an email from a lady who is having both knees replaced and wanted to use some music that she used 22 years ago for a heart procedure.  The problem is that the music, at that time, was on cassette tapes.  Can it be done?  Of course, but cassette tapes are in an analog format, so the music must be digitized.  It could be transformed into an MP3 file, or even a CD, which could be popped into a laptop and uploaded.

Will this lady be able to do that in time for her surgery?  We shall see.  She says she has some “young people” who can help and they are to call me tomorrow.  I certainly hope we can make it  happen for her, but this brings us to one of the main reasons I created these pre-programmed and programmable headphones in the first place.  When a patient finds out that they need surgery, or they decide that are going to have a procedure they’ve been putting off, creating their own music on headphones is not easy.  That’s why I’ve done it for you!  The classical piano music I’ve chosen is not familiar to most people and so there are no particular associations with it.

If you want to put your music on our headphones, you can certainly do it.  But you’ll need some basic skills with a USB cable and digital files.  If I can help or answer questions for you, don’t hesitate to email me here!!  Be healthy!

The Baby Boomer generation is having joint replacement surgery at an unbelievable rate.  It is definitely one of the most frequent surgeries that we Baby Boomers have.  Although I have not personally had one, I have helped many people get through them with the help of the Surgical Serenity Solution.

There are many Boomers who have never had any kind of surgery and when they find that they are going to have to have surgery, they are literally scared to death.  Many of them choose not to have the surgery because of this fear and terror.  Because they can’t move around easily, they often gain more and more weight, have more and more pain, and eventually become house-bound, depressed and isolated!

But listen to this lady tell her story.  She had undergone many surgeries and was getting increasingly fearful and anxious of the pain that she knew would follow.  She found out that she really did need a knee replacement and had tied herself up in knots trying to decide whether or not to go through with it. A dear friend heard about the Surgical Serenity Solution, and decided to get the preprogrammed, cordless headphones for her friend!

Here is what she told me, about two weeks after the surgery:

Jane Zellmer was anxious about her second knee replacement surgery.

This time the 54-year-old Ettrick, Wis., woman wanted spinal anesthesia, which would allow her to be conscious while numbing her right knee.

Zellmer also chose music to help with her anxiety and make her relax. Mike Jacobson, a nurse anesthetist at Franciscan Skemp, had a library of music from which she could pick. She chose her favorite music, country, and a favorite artist, George Strait.

With her headphones on, she listened to Strait’s music during surgery.

“It was very calming listening to the music, and I was comfortable,” Zellmer said. “I was nervous about the spinal anesthesia, but the music helped me relax.

“I felt like I was lying in the sun with headphones on,” she said. “Music did its thing, and it was a place to go, something to escape into. The spinal anesthesia and music worked real well together.”

More and more hospitals are using music for patients because research is showing it helps reduce moderate pain and anxiety, and it might result in less sedation and faster recovery.

A Yale University showed patients listening to music required much less sedation during surgery. Another study showed listening to music helps minimize the rise in blood pressure associated with surgery. Researchers say the best results are likely to come from people being able to listen to the music of their own choice rather than being given music thought to be soothing.

For many years, surgery rooms have been filled with the sound of music selected by and for surgeons.

“Patients have their own music option, but it’s the surgeon’s choice in the room,” he said. “I’ve never been asked what I want to hear, but I think whatever music helps the surgeon is a good choice.”

Dr. Mark Connelly, a Gundersen Lutheran facial plastic surgeon, has played music in his operating room for more than 25 years. He has a CD of Broadway show tunes, pop, country and classical music.

“The music is soothing, and it helps me relax,” Connelly said.

“Occasionally, the staff will sing along to ‘Stand By Your Man,’” he said. “Surgeons get to choose the music, but it’s nice when the operating group likes it.”

Jacobson is one of the DJs at Franciscan Skemp. He is in charge of a cart of CDs from which patients can choose, or they can bring in their own CDs.

Dr. Marisa Baorto, a Franciscan Skemp anesthesiologist, said music is used in conjunction with “conscious sedation,” such as spinal and regional anesthesia, for surgeries such as foot, carpal tunnel, knee replacement and breast biopsies.

Baorto said some pregnant women bring in their own music to listen to during labor.

“A lot of patients enjoy the music, and then they don’t have to hear what’s going on in surgery,” Baorto said. “Music helps them phase out and get less sedation.”

Jacobson said he can tell the difference in patients who enjoy the music.

“We can tell the patient is more calm,” Jacobson said. “I don’t think it is fluff. There are benefits to the patient, even some benefits during general anesthesia.” 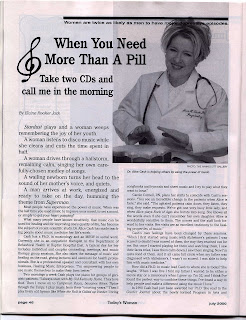 The stories keep pouring in of people who have used music through headphones with their various surgeries and had faster recoveries, less anesthesia and overall better experiences. One woman told me that if she had not had her headphones and music in the recovery room that the noise level in there would have driven her crazy. When you’re in a large room with lots of other people who have just had surgery, it’s inevitable that there will be a few people who are in acute pain. As you know, when people are in pain, they often cry out or at least moan and groan! My patient (who recently had knee replacement surgery) had to get past a nurse who initially said no to get to her anesthesiologist who said “I can’t imagine why it would cause any harm and if it makes you feel better, then go right ahead!”
PLEASE contact me at chantdoc@healingmusicenterprises.com and let me hel you prepare for your surgery with music. If you live in the Louisville, KY area I can even come to your home. If you live in Seattle or Boston or Dallas, we can do it over the phone or even have a teleseminar! Please take advantage of this easy-to-use technique that can greatly improve your chances of a successful surgery!
For more information, please go to http://www.HealingMusicEnterprises.com. Dr. Cash has conducted research on the healing properties of music at the University of Louisville School of Medicine. She has been on staff at several hospitals including Baptist Hospital East and Norton Hospital, both in Louisville, KY.