Surgery with Music Series, Post #12: Research in the field of Music and Dentistry

Music and Dentistry, what a great idea!  The first time I ever stood before a crowd of investors and entrepreneurs and described what I had just gotten a patent on, then-president of the Venture Club of Louisville, Robert Brown, Esq, immediately went to the microphone and said “you should introduce this idea to dentists!  No one likes going to the dentist.”  Of course I had thought of that, but this has been proven out time and again here in Louisville, as well as around the world.  Here’s the problem with people going to the dentist:  When you visit a dentist you are put on your back in a very vulnerable position.  A man or woman that you don’t know is within inches of your face and sometimes leaning again your arm or other body part.  This alone can be traumatizing for some.  When a woman, especially, has suffered abuse of a physical or sexual nature, the thought of being in this vulnerable position, and then suffering dental pain on top of that, is unbearable.  For this reason, many women and men avoid going to the dentist and, as a result, their teeth get into a terrible condition and their suffering is simply postponed.

Education around this topic is critically important, but another way that dental professionals can help is to offer soothing music through cordless headphones to their patients.  We now have three options:  two different pre-loaded headphone models, OR Bluetooth headphones, belonging to patient or dentist, and one of our well-researched playlists in 5 different genres!  To see these choices, go to Bluetooth Headphones with Digital Playlists 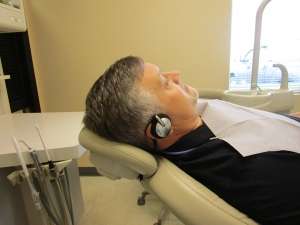 One of the big issues, whether in dental or medical fields, is the opioid crisis.  See the article below to read an excellent article about the power of music and of Surgical Serenity Solutions in dentistry.  One of the interesting points that this article mentions is the fact that Dentistry was an early adapter of what they called “Audio Analgesia” in the 1950’s.

Professional interest in the use of audio-analgesia first appeared in the Journal of the American Dental Association in October 1961. In August 2015, the Lancet published a systematic                      review of more than 4,200 articles, including 73 controlled trials, that concluded: “Music could be offered to help patients reduce pain and anxiety during the postoperative period. Music                  is a noninvasive, safe, and inexpensive intervention that can be delivered easily and successfully in a hospital setting. We believe that sufficient research has been done to show that music                  should be available to all patients undergoing operative procedures.”1