Nursing and Music: a match made in Heaven

This week has been National Nurses Week and I’ve been interacting with some very forward-thinking nurses.  These nurses recognize the healing and restorative benefits of music.  One nurse in particular, is searching for a way to use music in the ICU with patients who are struggling to regain their health. Some are struggling to regain consciousness.

Nurses and caregivers have probably been using music since the beginning of time.  It’s natural to want to comfort a patient in any way possible, but as busy as nurses are all day long, the intervention must be simple and efficient.  Nurses are allowed to sing and hum when patients are OK with it, but not every nurses has that gift. 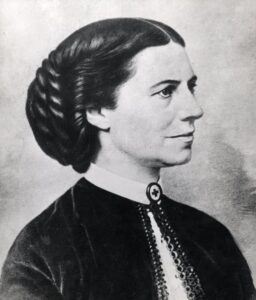 Clara Barton founded the American Red Cross in the early 1880’s and was passionate about her mission to respond to anyone and everyone who might be in an emergency/crisis situation.  She worked tirelessly in New England trying to raise awareness of the dire needs of people and also trying to raise money to support her mission.  In the end she was quite successful and that’s why most of us have heard of the American Red Cross today.

This organization still responds to people all over the world who have undergone a natural disaster or other tragedy.

I’m proud to say that my grandmother, Julia Adelaide Fishel Adams worked for the American Red Cross and I grew up hearing about the life-saving work of this amazing organization.

Clara Barton was a believer in the power of music to change patient’s lives and bring them peace and comfort. She tended to soldiers  as they recovered from their battle wounds during the Civil War. Contemporaries called her “The Angel of the Battlefield.” 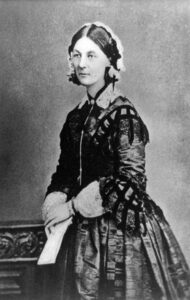 Florence Nightingale, (1820-1910) was the nurse called the Lady with the Lamp. She was British and a famous nurse during the Crimean War. She was also a social reformer and considered to be the founder of modern nursing.  Florence Nightingale in particular is known internationally and many of her quotes are still remembered today. One of my favorites is :

“A human being does not cease to exist at death. It is change, not destruction, which takes place.”

In Notes on Nursing: What It Is And What It Is Not1, Florence Nightingale’s important book, she wrote:

The effect of music upon the sick has been scarcely at all noticed.  I will only remark here, that wind instruments, including the human voice, and stringed instruments, capable of continuous sound, have generally a beneficent effect–while the piano-forte, with such instruments as have no continuity of sound, has just the reverse. (the pianoforte was an historic instrument that followed the harpsichord and preceded the modern piano. It did not have a damper pedal and therefore was not able to sustain sound like the modern piano can do.)  The finest piano-forte playing will damage the sick, while an air, like “Home, sweet home,” or “Assisa a piè d’un salice,” on the most ordinary grinding organ, will sensibly soothe them–and this quite independent of association. (Florence Nightingale, 1898: Notes on Nursing)

I’m not sure I agree with this, but I find it very interesting to know that she believed this.

The first music that I found to be very effective in the ICU, as well as the perioperative period, happens to be soothing, calming piano music.  Music that has a steady tempo, the tempo of the healthy, resting heartbeat is best.

To hear samples of this music and all of our playlists, go to www.SurgicalSerenitySolutions.com/calm.  Each of these playlists is 50-60 minutes in length. There are five distinct genres to choose from: Classical, Jazz, New Age, Lullabies and Memory Care.

I am deeply grateful for the work of all nurses and excited to know that they are embracing the use of music in the ICU. Helping patients get through a very difficult time in their lives is so important.