More on the History of Anesthesia and Sedation 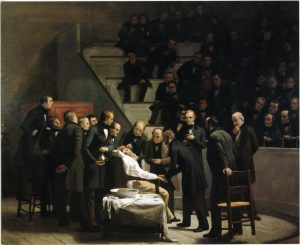 Over 25 years ago, I began learning about the use of music as an adjunct to anesthesia.  I didn’t know that much about anesthesia and sedation, but I knew that I didn’t want any more than I absolutely needed.  I knew that anesthesia was powerful stuff, so when I found out that I would be having a baby (over 40 years ago!) I knew that I wanted to have natural childbirth and not a “saddleblock” or any kind of spinal anesthesia.  Not only did I just not like the idea of someone putting a needle in my back, but I knew enough women at that time, who had utilized the LaMaze Method or the Bradley Method, that I knew it was quite possible with proper preparation, childbirth classes, and a willing husband, which I had!

In 1990, when I stepped into the field of Music Medicine, one of the things that fascinated me was the concept of music as a way to enhance minimal anesthesia usage and a way to tap into the powerof rhythmic entrainment.

Timeline of Progress in Pain Management during Surgery:

CA 1600 BCE Acupuncture being practiced in China, according to pictographs on bones and turtle shells

64 AD  Dioscorides, a Greek surgeon in the Roman army of Emperor Nero, recommends mandrake boiled in wine to “cause the insensibility of those who are to be cut or cauterized.”

CA 800-1300 After herbal mixtures including opium, mandrake, henbane, and/or hemlock are steeped into a soporific or sleep-bearing sponge (“spongia somnifera”), the sponge is dampened so that anesthetic vapors or drippings can be applied to a patient’s nostrils. These sponges were likely historical cousins to the so-called Roman or Arabic sponges (used during crucifixions, surgeries, and other painful events).

1540:  German physician and botanist Valerius Cordus (1515–1544), synthesizes diethyl ether by distilling ethanol and sulphuric acid into what he called “sweet oil of vitriol.”

1805:  Pharmacist Friedrich Sertürner (1783–1841)—Isolates a new substance from opium, which he later names “morphium” after Morpheus, the god of dreams.

1845:  Dr. Horace Wells (1815-1848)-After bravely volunteering to inhale nitrous oxide for his own dental extraction back in December of 1844, Dr. Wells demonstrates nitrous oxide anesthesia for a tooth extraction near Massachusetts General Hospital, but the partial anesthetic is judged a “humbug.”

1846: On October 16, William T. G. Morton (1819-1868) made history by being first in the world to publicly and successfully demonstrate the use of ether anesthesia for surgery. This occurred at what came to be called “The Ether Dome,” at Massachusetts General Hospital on patient Edward Gilbert Abbott. Surgeon John Collins Warren noted, “Gentlemen, this is no humbug.” Dr. Oliver Wendell Holmes, Sr. (1809-1894)-suggests the terms “anaesthetic” and “anaesthesia” in a letter to William T. G. Morton. News of Morton’s ether demonstration was carried by the paddle steamship Acadiafrom Boston to Dr. Francis Boott and then on to Dr. James Robinson (1813-1862), who extracted a tooth on December 19, 1846, under ether anesthesia. In 1847 Robinson authored one of the first textbooks on anesthesia: A Treatise on the Inhalation of the Vapour of Ether for the Prevention of Pain in Surgical Operations.* On December 21, Scottish surgeons in Dumfries, Scotland (Dr. William Scott) and in London (Dr. Robert Liston) amputate limbs of etherized patients- the first such surgical anesthetics in the British Isles. Liston commented, “This Yankee dodge beats mesmerism hollow.” Dr. Liston describes the surgery in a letter to Dr. Francis Boott, which is published in The Lancet. The WLM owns this letter.

1853:  Drs. Charles Pravaz (1791-1853) and Alexander Wood (1817-1884)-These men independently invented the hollow hypodermic needle, which will be attached to an earlier invention, the syringe popularized in 1845 by Ireland’s Francis Rynd.

1902:  Dr. Mathias J. Seifert of Chicago coins the words “anesthesiology” and “anesthesiologist.” He asserted that an “ANESTHETIST” is a technician and an “ANESTHESIOLOGIST” is the scientific authority on anesthesia and anesthetics.

1929:  The Anaesthetists’ Travel Club is organized by Dr. John S. Lundy, who will popularize use of the intravenous anesthetic thiopental (Pentothal) and will become the ASA President in 1946. The popularity of thiopental-as a swift-onset intravenous agent for inducing general anesthesia-will pave the way for other totally unrelated intravenous induction agents, such as ketamine, etomidate, and propofol.

Dr. Robert Hingson develops Continuous Caudal Anesthesia, an innovation in obstetrical anesthesia that provides continuous pain relief for prolonged or difficult labor. In 1958, Dr. Hingson starts Brother’s Brother, a nonprofit charity for supplying medical, educational, and agricultural supplies worldwide. His needle-free “Peace Guns” would mass-immunize millions by jet injection and would be featured as the “Hypospray” in Star Trek and many science fiction films

1999: In its report To Err is Human, the Institute of Medicine lauds the efforts of anesthesiologists in improving patient safety

By 1999, I was well on the road to trying to figure out how music could be used as an adjunct to anesthesia, in order to create a safer surgical experience by decreasing the amount of anesthesia, as well as anxiety and pain medication, before, during and after surgery!

The rest is history!!  For more information on this, please visit https://www.woodlibrarymuseum.org/history-of-anesthesia/