More Info on dangers of Propofol: use ONLY as directed

LAS VEGAS—Michael Jackson’s doctor bought a powerful anesthetic in Nevada and had it shipped to California, where it was found at the pop singer’s bedside after he died, court documents released Friday show.
Search warrant records released despite objections by Los Angeles police revealed that investigators found receipts in Dr. Conrad Murray’s Las Vegas medical office showing he purchased the sedative propofol from Applied Pharmacy Services on May 12.

Murray, 56, a cardiologist licensed in Nevada, California and Texas, told police he used propofol along with other sedatives to help Jackson sleep.

Propofol is usually used in medical settings by anesthesia professionals to render patients unconscious for surgery. Officials say it is not meant for use as a sleep agent. However, the milky liquid drug is not regulated by state and federal authorities as a controlled substance.

Drug Enforcement Administration spokeswoman Sarah Pullen in Los Angeles said a doctor who is licensed in two states can buy propofol in one state and administer it in the other.

Murray is the focus of a Los Angeles police homicide investigation, but has not been charged with a crime.

world tour. He told police he administered 50 milligrams of the drug intravenously per night to help Jackson sleep, but was trying to use less.
In the warrant documents, investigators said Murray told them he gave propofol to Jackson in the hours before he died in a rented Los Angeles mansion.

Through a spokeswoman, Murray maintains that he didn’t prescribe or administer anything to Jackson that should have killed him.

“The fact that Dr. Murray ordered five bottles of propofol is consistent with what he told investigators,” Chernoff said.

The affidavit showed that authorities tracing the manufacturing lot numbers of propofol bottles found in Murray’s medical bag and on Jackson’s bedside table learned that Murray bought five, 100-milliliter bottles of the drug from the Las Vegas pharmacy as part of an order costing $853.

He paid $65 extra to have it sent to him by overnight express, the document states.

Authorities said the amount of the drug purchased did not appear improper, the fact that it was moved across state lines from Nevada to California was not illegal, and because propofol is not a controlled substance it would not be tracked.

A veteran DEA investigator in Las Vegas, Jayne Tomko Griffin, said the five bottles of propofol could have provided 100 doses of 50 milligrams each.

Los Angeles police fought to keep records of the Aug. 11 search sealed. A detective argued that releasing the documents before Jan. 18 would jeopardize the investigation.

Attorneys representing The Associated Press, Los Angeles Times, TMZ Productions Inc. of Los Angeles and Stephens Media LLC, the parent company of the Las Vegas Review-Journal, argued there was no reason for the documents to remain secret.

The Mayo Clinic in Rochester, MN is one of the most highly esteemed medical facilities in the world. Imagine how thrilled I was to find that they strong recommend the use of healing music for patients having open heart surgery.

Here is what they said:
Patients scheduled for heart surgery at Mayo Clinic in Rochester will receive a brochure on the Healing Enhancement Program when they are admitted to the hospital. The brochure lists the healing enhancement therapies that are available.

Patients and their family members are encouraged to discuss these complementary therapies with their cardiac medical team to determine which therapies may provide benefits during which treatment segments: prior to, during, or after patients’ surgical procedures.

Patients and families can select the therapies and coordinate with designated nurses to schedule the services. Therapy options include:

What they suggest specifically for music is:

Research on the effectiveness of music therapy dates back to the 1920s, when a study reported individuals’ blood pressure dropped when listening to music. Currently, our program is conducting a research study to measure the effects of music therapy on pain, anxiety and tension.

As part of the Cardiovascular Surgery Healing Enhancement Program, rooms for cardiac surgery patients have music systems. A selection of CD music is available at each cardiac surgical unit. We encourage patients to bring their own preferred music. Selections on hand include easy listening, relaxation, classical, country, and instrumental. Contemporary music with sounds of nature, such as birds chirping and water flowing, is also available. Music systems include AM/FM radios.

Needless to say, I will be contacting them THIS WEEK about my wireless/cordless pre-loaded headphones for surgery!

Music in the PACU: New Study from Sweden

We performed an experimental single-blind crossover design study in a postanaesthesia care unit (PACU): (i) to test the hypothesis that patients will experience a higher degree of wellbeing if they listen to music compared to ordinary PACU sounds during their early postoperative care, (ii) to determine if there is a difference over time, and (iii) to evaluate the importance of the acoustic environment and whether patients prefer listening to music during their stay.

Two groups received a three-phase intervention: one group (n=23) experienced music-ordinary sound-music and the second group (n=21) experienced ordinary sound-music-ordinary sound. Each period lasted 30 min, and after each period the patients assessed their experience of the sound. The results demonstrated a significant difference (p<0.001) between groups in the proportions of patients reporting that the acoustic environment was of great importance for their wellbeing during the three-phase intervention, and most participants (n=36 versus n=8) noticed that they were exposed to different sounds during the PACU period. The results also revealed that most participants (n=32) preferred listening to music versus listening to ordinary sound (n=3) while in the PACU (p<0.001). These findings promote use of listening to music to establish a healing environment for patients in a postanaesthesia care unit

[Epub ahead of print]

Background: Music medicine has been proposed to reduce distress, anxiety, and pain. There has been no other study that evaluates effects of music medicine (MusiCure((R))) in children after minor surgery.

Results: Data were recorded from 80 children aged 7-16. Forty participants were randomized to music medicine and another 40 participants to a control group. We found evidence that children in the music group received less morphine in the postoperative care unit, 1/40 compared to 9/40 in the control group. Children’s individual FAS scores were reduced but no other significant differences between the two groups concerning FAS, CAS, FLACC, short STAI, and vital signs were shown. Children experienced the music as ‘calming and relaxing.’

Conclusions: Music medicine reduced the requirement of morphine and decreased the distress after minor surgery but did not else influence the postoperative care. 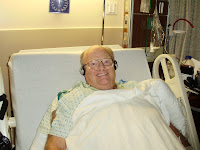 Since I created my headphones for surgery last year, I also decided to offer just the download of the music as well. Lately, more people are choosing to download the music to put on their own MP3 players. Obviously I think this is a wonderful idea, better than having no music or taking in music that could actually energize the body and require more anesthesia to relax the body and keep it asleep. The ideal solution though is the surgery music headphones. This is because you can have the music delivered directly to the brain, through the 8th cranial nerve, and you can avoid all wires and cords. Any MP3 player in the world today has two wires that lead from the player to the headphones or earbuds. My headphones have NO wires or cords and deliver the music from a programmed chip in the headphone itself, powered by a lithium battery. In the past year, NO ONE has been prevented from taking the headphones into surgery! As a matter of fact, patients report that the doctors and nurses are fascinated by the headphones and music and eager to see them work! If you or anyone you know is having surgery, go immediately to www.surgicalheadphones.com and check these out. Thanks!