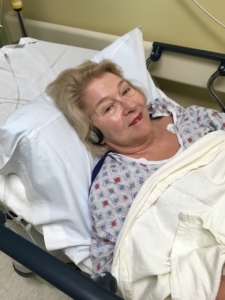 Colonoscopy is a common procedure these days, and one that is very helpful for diganosing colon cancer in its earliest stages.  BUT, it sure is not a pleasant procedure, even after you’ve done the cleansing prep!  I was told that it was time for my every 10 years colonoscopy and I was not looking forward to it.  Of course I knew immediately that I would use my Surgical Serenity Solutions headphones and music.

I decided to start preparing myself 10 days in advance by limiting the amount of meat that I ate, and for the last four days, had no meat at all.  I wanted the prep cleanse to be as easy as possible and, although, it wasn’t pleasant, it wasn’t nearly as bad as some of the previous ones.   The last 36 hours before my colonoscopy, I had no solid food at all and that was definitely not pleasant.  I bought plenty of chicken broth, jello (but nothing red, purple or orange!) apple juice, ginger ale, and black coffee.

I had to be at the hospital by 7:30 a.m and was up for much of the night before going through the cleanse process. ;-(  As soon as I checked into the hospital colonoscopy suite, I put on my Surgical Serenity headphones and immediately began to calm down and relax.  By the time they called me back about 30-40 minutes later, I was almost asleep!  The nursing staff was so interested and wanted to know all about them and even try them on!!

So after the anesthesiologist had checked in with me and the nurse had inserted the IV, I was wheeled away for the colonoscopy procedure, headphones still playing the beautiful, soothing, calming music.  Next thing I knew, I was waking up in the recovery room and asking for some coffee and asking if I could go out for breakfast!!  I was starving!  Unlike previous procedures, I had absolutely no nausea or grogginess.  I do believe that the Surgical Serenity headphones made a huge difference and I continued to wear them all the way to breakfast!