Surgery with Music Blog Series, Post #15: What do doctors and other medical professionals say about this concept?

The truth is, some doctors have been using music in the operating room for many decades.  In ancient Greece and Rome, music was a staple of the physician’s healing tools and physicians knew the healing powers of specific instruments, specific rhythms, harmonies, and modes.  But then people became “civilized” and much of the routine use of music as a healing modality slipped away. 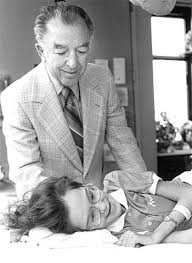 Dr Leatherman was one of the first physicians in Louisville to use music in the operating room.

In Louisville, KY, I am aware that one Dr Kenton Leatherman used music at Norton Hospital before World War II.  Dr. Leatherman was a specialist in spine surgeries, which in the early 40’s were particularly long and laborious.  He was the first surgeon in Kentucky to treat scoliosis with metal rods.  Dr. Leatherman was in the audience in the early 1990’s when I spoke to a group of retired physicians in the Cato Society.  He told the assembled group during the Q and A period, about how he had used music at Norton Hospital to help scoliosis surgery patients, as well as himself.  Dr. Leatherman paid a lady to sit in a corner of the operating room with a record player and a stack of 78 RPM records, which she had to change every 2-3 minutes!  He told us, with a smile, about the day that the patient began waking up unexpectedly, and the music that was playing was “When the Saints Go Marching In!”  He said that they quickly clapped the ether mask over her face because she was clearly confused about whether she was still on the Earth or in Heaven!!  🙂

Of course now, things are much more sophisticated and doctors are very accustomed to having their own preferred music playing in the operating room.  Sometimes, they think that the patient will enjoy what they enjoy, but other times, they just think that the patient won’t really hear it and that it doesn’t matter anyway.  Because of that, I feel that educating medical professional about the benefits of music, through cordless headphones, during surgery is my #1 mission!  One of the first anesthesiologists to actually write an essay about this, was Dr. Thomas Mayo, an anesthesiologist in Boston.  Here is what Dr. Mayo said:

“As an anesthesiologist with an extensive background in classical music, I am a strong proponent of Dr. Cash’s headphones.                                   Rarely, if ever, in medicine is there an intervention that has repeatedly demonstrated efficacy in multiple studies                                that also carries with it virtually no risk to the patient. As a physician, I am always weighing the risks and benefits of each treatment to determine if it’s worth utilizing. Surgial Serenity Headphones are unique in that they carry immense benefits without any downside. I am always pleased to accommodate a patient’s wishes to bring music into the operating room. I would be particularly enthusiastic if they had these pre-programmed cordless headphones that would maximize the physiologic benefits through rhythmic entrainment. I recommend talking to your surgeon as soon as possible in the process, and certainly mention your desire to bring headphones in on the day of surgery to the anesthesia team. This would best be accomplished if you have a pre-op appointment with someone from anesthesia, but not everyone will have this chance. This could also happen during a pre-op phone call. Whenever it happens, try to be prepared to assuage any concerns or skepticism with the fact that these headphones, and music in general, have been and are currently being used in operating rooms across the planet, including many world-renowned medical centers.”

More and more physicians are recognizing the benefits of music in the perioperative period and I will be citing some other physicians from the USA as well as internationally as I present Week 3 of this Series on “Surgery with Music.”