Learn about the benefits of music with surgery! 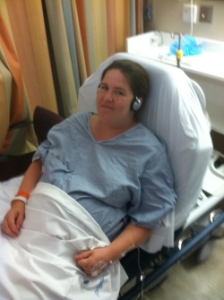 Benefits of music with surgery

The benefits of music with surgery are very great, but the majority of patients are not aware of them!  Nobody wants to have surgery and that’s a fact!!  I’ve had just a few procedures under the knife and with general anesthesia and it is not a pleasant experience. But now we know that using the right kind of music for the patient, before, during, and after the procedure can make a huge difference in how the patients feels, and even in how the procedure goes!

In the early 1990’s I was given the amazing opportunity to work at the University of Louisville’s School of Medicine, conducting clinical research on the healing powers of music.  It was such a dream job for me because I knew that music was powerful medicine in all kinds of situations, but my boss, Dr. Joel Elkes, said that the medical world now demanded empirical evidence that this was the case, and that I would be the one to gather this empirical evidence!  Jump to 1994 and I was told that I need back surgery for a bulging/ruptured disc.  By then, I know that I was going to have specially chosen music (by me!) to listen to before, during and after the procedure.  I asked my surgeon, Dr. Wayne Villanueva if I could bring in my Walkman with three difference cassette tapes to listen to, and he that if I could also bring a friend to change the tapes at each juncture, that would be fine.

In July, 1994, I arrived at an excellent hospital here in Louisville, KY for my surgery.  I had put together a tape of my my favorite slow, steady, soothing and comforting music for the entire procedure, ending when I was released from the recovery room.  A friend changed the tapes for me as I left pre-surgery, and again when I arrived back into the recovery room.  The doctors were amazed!  They said that my procedure was faster than expected and that I required not only less pain medication and anxiety medication, but I actually used less anesthesia!  I felt nothing of course, but I did really enjoy the music as I was wheeled into the operating room and the anesthesia began to take effect.  In no time, I was waking up in recovery with the awareness of where I was and what had happened, but without the usual nausea and dizziness/confusion/brain fog.

Jump to 2005 and a fabulous conference in Cancun, Mexico that I went to, sponsored by the National Speaker’s Association.  This was a conference on Product Innovation and this is when I came up with the idea for Surgical Serenity Solutions!  To have pre-programmed headphones for the surgical patient, ready to go and deliver beautiful music, specially chosen for surgery, is a gift that is truly priceless!  We now have models for the patient to buy as well as for the hospital to have on hand for the patients.  I hope you’ll get yours today!  Don’t wait til you need surgery?  People are now using them for dental visits, insomnia, long plane rides and many more options!  www.SurgicalSerenitySolutions.com!

By DrAlice|December 5, 2016|Benefits of music during surgery, Fear and Anxiety about Surgery|0 Comments