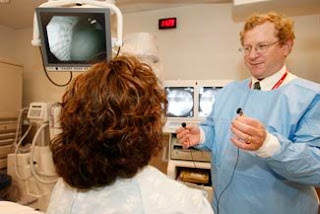 While few people will rank a colonoscopy as a favorite medical procedure, one statistic argues clearly in its favor: a 90 percent cure rate in colon cancers caught at an early stage.

Benjamin Krevsky, a professor of medicine at the School of Medicine and director of gastrointestinal endoscopy at Temple University Hospital, found that when patients undergoing a colonoscopy listened to music, they required less sedation. (Photo by Ryan S. Brandenberg / University Photography)

Still, patients often approach the test with a mixture of dread and anxiety. Despite sedation, people fear discomfort, and often put off the appointment.

To address this common problem, doctors have added an extra ingredient: music.

A new study reveals that patients who plug into their favorite tunes during a colonoscopy procedure may be able to relax enough to require less sedation, without sacrificing comfort. Results of the double-blind study by doctors at Temple University in Philadelphia were presented at this year’s American Society for Gastrointestinal Endoscopy national meeting.

Their findings align with other research that has shown music reduces anxiety before surgical procedures. Such promising results have led several hospitals around the country to begin studies on how music affects health.

In the colonoscopy study, researchers asked 44 female and 29 male subjects to either bring music from home or choose from a selection of available CDs. Before the procedure, ear buds were taped to all of the participants’ ears and volume set to be audible to only the patient.

After the patient received his or her initial dose of medication, an investigator opened a randomized envelope to see if the music selections would be played. Following the colonoscopy, the attending doctor, fellow and nurse evaluated pain, anxiety and comfort levels for each patient. A non-participating medical provider conducted a second, later interview.

Results revealed that those who listened to music required less sedation (3.8 mg of midazolam vs. 4.4 mg, and 87 mcg of fentanyl vs. 93 mcg) yet reported the same comfort levels as those receiving the higher amounts.

The reductions, equal to about one less dose of medication, are considered clinically significant, according to Benjamin Krevsky, M.D., M.P.H., the lead author of the study, who is a professor of medicine at Temple University School of Medicine and director of gastrointestinal endoscopy at Temple University Hospital.

“It’s true that many patients don’t like the procedure,” said Krevsky, “but many find that the preparation for the test is worse than the test itself.”

Co-investigator Kevin Skole, M.D., who was a gastroenterology fellow at Temple, had the original idea for the study. Krevsky too was inspired when a dentist handed him ear buds to listen to music during a dental procedure.

“Over all, colonoscopies are very, very safe,” Krevsky said. “And while the risks of sedatives are relatively small, in general, less medication is always better.”

Most of the participants picked gospel tunes, but the type of music didn’t appear to make a difference.

“Offering music makes sense,” Krevsky said. “It has no downside, it may prove beneficial, and patients appear to be satisfied with the procedure.”

All of which may add up to less anxiety and more colonoscopies.

By DrAlice|January 25, 2009|Common Fears in Surgery, Dangers and Side-effects of anesthesia, Surgery with Music Research|0 Comments